“Uganda’s average growth has been down in recent years compared to the accelerated growth (7%) in 1990s. The main factors of an economic slowdown is the adverse weather, being landlocked with South Sudan, private sector credit constraints, and strategies of the public sector projects that fail from lack of execution. The annual growth of Uganda in 2016-2017 was slowed to 3.5%. “(World Bank 2018)

Ten by Three is located in one of the most difficult places to reach in Uganda. It is a trek for us to get there and imagine how hard it is getting doctors out there? We decided to bring the doctors to the village. The clinic was being conducted in three extremely rural villages making sure every civilian was seen. More than 350 people were seen.

Raffia does grow relatively abundantly throughout the Mpigi and Wakisu districts where our artisans live. The banana plants used for the internal materials are readily available and are often planted by the artisans around their homes. They eat the fruit which is produced then use the stalks of the leaves to weave.  The harvesting of the leaves of both plants encourages the growth of new leaves.

First you have to climb the palm which is difficult since there are no branches. The new leaf growth is harvested by cutting.  The halves are dried and split several times forming many independent fibers. Those fibers are then bundled together and wrapped with the raffia to create all of our Ugandan baskets. As opposed to banana stalk is bundled about 6-7 pieces per row, and the raffia palm wrapped around them creating various colors and patterns. To join the various layers together they use a needle and using the palm  to “sew” a stitch every few inches to hold the basket layers together. These stitches must be carefully considered as often times they are visible in the overall pattern of the basket.

TIME FRAME: It takes the average Ugandan artisan 2 days to weave a basket. 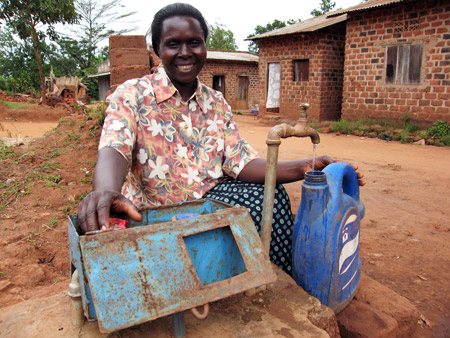 Grace Nassale realized easy access to clean water is a serious challenge for most rural Ugandan women. She found a way to solve this problem. A government supplied water line ran through her village, inaccessible to those who truly needed it. Grace used her Prosperity Wages to buy a metered tap on the water line. She now sells clean water to her neighbors for a small profit. This is one of three sustainable sources of income Grace generated for herself using her weaving income putting her on the road to permanent financial independence.

Harriett Nkonge is not afraid of hard work. She is one of the artisans who benefits from your purchase. She used the Prosperity Wages® we pay her to enlarge her garden, buy a sewing machine and take sewing classes, put all four of her children in school, start a chicken business, and most importantly, install electricity in her home. Installing electricity lead to her most prized purchase, a cell phone.  Harriett now makes more money charging cell phones in a week than she did working in the garden for a month.  She has clearly started her sustainable exit from poverty because of your support. 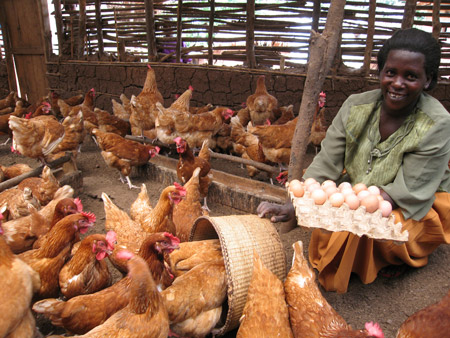 Immaculate went from surviving to thriving thanks to your purchases of her Blessing Baskets. A weaver in rural Uganda, she increased her monthly earnings by more than 140% through The Blessing Basket Project’s Prosperity Wages model. Using this new capital, Immaculate started several agriculture based businesses, including selling chickens and eggs. These income generating activities will soon enable her to achieve financial independence from our organization. Our measure of success is sustainable financial independence in the lives of our artisans. Thanks to your purchases, Immaculate graduated from poverty and exited our program in in 2010.